You are here: Home / Circumcision / My notes on male (and female) circumcision

I wrote this for the one-year anniversary of saving my son’s penis.  I was going to cut him according to Jewish custom, on the eighth day of life.  Though I am Christian, I adhere to some Jewish traditions and enjoying reading my Bible in its original Hebrew.  In no way is the following seeking to minimize the importance of the Jewish religion.  My husband and I became informed from hours of research and decided to keep our son whole — he was born perfect.  I hope and pray that our research may benefit another young baby boy from the harmful effects of circumcision. 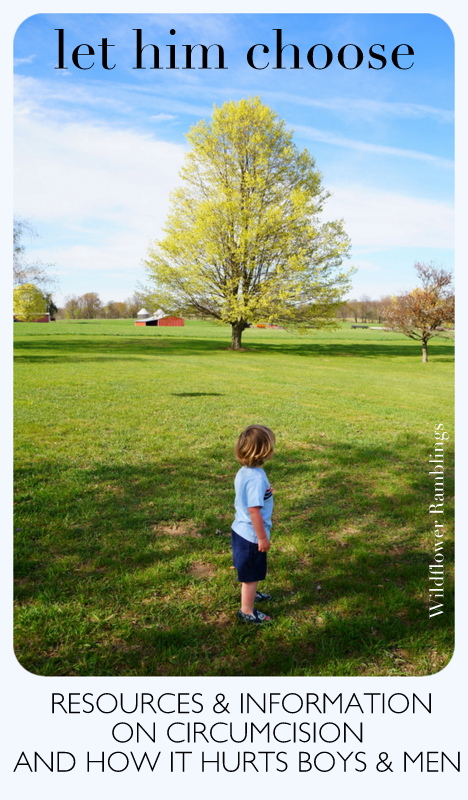 Paul wrote in his letter to the Colossians that it is by faith you are saved; circumcision (the blood sacrifice introduced to Abraham in Genesis 17) is no longer necessary for salvation: “Do not lie to one another, since you have put off the old man with his deeds, and have put on the new man who is renewed in knowledge according to the image of Him who created him, where there is neither Greek nor Jew, circumcised nor uncircumcised, barbarian, Scythian, slave nor free, but Christ is all and in all” (Colossians 3:9-11).

God ended required circumcision, through Christ, on the bloody cross.  He asked Abraham and his descendants to make a huge sacrifice.  But this practice was only a small portion of the tip of the foreskin (called Milah).  Evidence can be found at Milah v. Periah and an article written by Jay Michaelson.  Both explain that the destruction and cutting of the entirety of the foreskin (called Periah) is quite different than what was introduced in Biblical times.

Before my own son was born, I never thought of circumcision as unnatural or barbaric because I blindly thought that it was done for the sake of the baby.  After watching a male circumcision being performed, I am beyond thankful that we chose not to cut my son.  When people ask me, “Why didn’t you circumcise him?”  I respond, “Would I have circumcised a baby girl? Would I cut her genitals apart?”  Of course not — I see both of these surgeries as equal.  They both cut from the human body their most sacred and private parts.

Here is another video of the procedure.  Observers often can be heard saying that they have never heard a louder, or more powerful, scream as the one a child makes when their manhood (or womanhood) is cut from their bloody bodies.  I think that every parent should watch a dozen of these videos.  And here is another video.  And another.

Even the American Association for Pediatrics now classifies male circumcision as a “cosmetic procedure,” but it classifies female circumcision quite differently, as this procedure is, (rightfully) outlawed in the United States.  Why are baby boys not protected and baby girls are?  Both practices are genital cutting. And until male cutting is against the law, I will not be satisfied, and nor will many millions of others who devote their lives to exposing the atrocity of male genital mutilation.

Many parents blindly use the excuse that they desire for their sons to not look or be different from their fathers.  But, I ask, does a child’s penis look the same as an adult’s, circumcised or intact?  Certainly not.  And when a male reaches the age of maturity, will he be comparing penises with his father?  Certainly not.

It was argued, in the past, that circumcision is more “clean” or prevents sexually-transmitted diseases.  This argument is faulty and the statistics prove it.   Here is a rebuttal of the “circumcision prevents HIV transmission” argument.  Presently in Africa, many celebrities are misleading uneducated Africans that circumcision will prevent AIDS.  Adult males are being harassed into cutting their penises and being told it is best for their sex lives and for their health.  This is a lie and a travesty.  Bono and Bill Gates are a part of this barbaric movement.  And a circumcised penis is no easier to clean than a whole penis; the argument that a foreskin is unclean is beyond ridiculous.  Do we cut female genitals, because their labia have to be “pulled back” to rinse in the shower?

Periah circumcision continues today, and causes male sexual problems such as: painful penile growth during maturity and up to adulthood, impotence, erectile dysfunction, dissatisfaction with sexual life, and lastly, poor sexual experience.  Women often have “sexual dysfunction” issues or problems due to dryness, when actually the real issue is that her partner is cut and the friction during sexual intercourse is painful due to male circumcision and not a woman’s personal lubrication issues.  Jews against circumcision and Catholics agains circumcision have been speaking about these consequences for years.

Many adult men deeply resent their most private and nerve-sensitive areas being cut off.  There are men out there who have chosen circumcision (or were told by a doctor that it was required after an injury) after experiencing life with an intact, whole penis.  These men write honestly about their loss and devastation in regards to feeling and climax satisfaction.  Actor-director Ben Affleck is one of these men, having been circumcised at an older age and deeply resenting it.  A glossary of proud intact men can be found here.  There is also a movement towards foreskin restoration to help men revive some of what was taken from them.

Where in the world?

Today, the only countries that routinely practice male circumcision are the United States, South Korea, Philippines, Israel, and some Polynesians and Australians do as well.  In the US, the infant rate is now approximately 36%, which is much lower than 55% just ten years ago and 80% twenty years ago.  However, the rate in European nations (and Canada) are are about 20% and Europeans are aghast at how readily circumcision is still routinely practiced in the US; over there, it is done for religious reasons, particularly still amongst Jews in Europe.  However, an estimated 1/3 of the anti-circumcision (intactivist) movement consists of Jewish people. European nations are even beginning to limit the circumstance allowable for legal male genital cutting, and circumcision has been banned in Sweden.  Male circumcision is most prevalent amongst Jewish and Muslim peoples.  Here is a map breakdown of countries that practice genital mutilation, both male and female.

One more interesting point should be noted.  In this country, we have more sexual abuse perpetrated by men than any other country.  It has been argued that a root cause of this may be from the psychological harm caused by male circumcision. (See: Ending circumcision: where sex and violence first meet). The explanation for this is that the first sexual experience for the infant male consists of his foreskin being ripped from his penis (they are molded together, similar to a fingernail to a finger) and then painfully cut from his body.  This is an extremely violent and bloody experience.  The sexual and violent act merge, becoming inter-connected in the psyche of men, and can lead to abuse perpetrated by these men onto others.  I am not arguing this as fact, but it is certainly a well-written and well thought-out argument.

Lastly, I must say, I know many men who are circumcised and have a very high-quality of life.  (Obviously), life does not end with circumcision.  All the men close to me — as far as I know — are circumcised, with the exception of my son.  I do not judge their parents for making decisions based on their experience and their knowledge at the time.  I do think that we are capable of cherishing our boys’ sexuality in the same way we cherish our girls’.  I believe their bodies deserve to be treated as sacred and perfect, from conception.  I want to encourage my son to love himself and his body, as it was created by God, from birth, through puberty, and throughout his sexual life.

**Are You Fully Informed? and How to Care for the Intact Penis — from the Peaceful Parenting site: DrMomma.org and 50 Reasons to Leave it Alone. 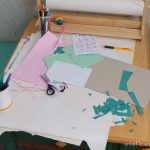 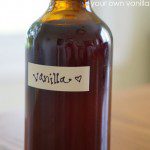 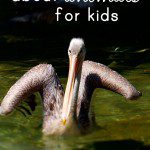 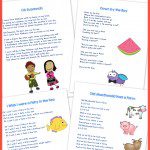 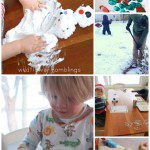 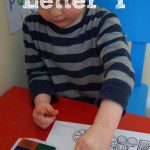