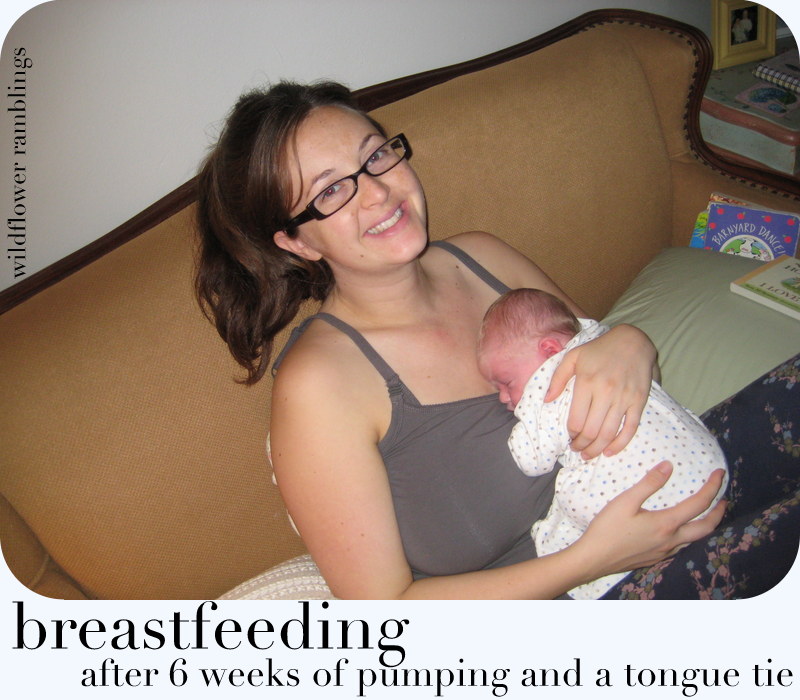 I never anticipated the struggles I would have with breastfeeding.  I had heard, from many mothers, of the pain and of the trouble with milk-flow.  But until I experienced what mothers go through, I was very naive to the reality.  I wanted to share my hardships here to encourage other moms who have experienced, or are experiencing, some of the same issues.  It is important to talk about breastfeeding, in its glory and its pain, because all too often, in our society, this divine process is not encouraged or considered the best for mother and baby.  I persevered with prayers and patience that I would be blessed to breastfeed my little one, and I rested in the the assurance that God would answer me.  I put my faith solely in Him, the Creator of breastfeeding, and that I would have victory through Christ who gives me strength.

My precious son was born at home, therefore he was unmedicated, and I thought would have little difficulty with breastfeeding.  Midwives, and most doctors, encourage mothers to put babies to the breast immediately after birth.  He didn’t have a clue what to do.  His mouth would wander, closed, around the breast.  I tried to open his mouth, but he was simply not interested.  This went on for two days.  He would not try to suck and would not try to suck a finger when we wanted to encourage his sucking reflex.  I literally felt that my baby did not have a sucking reflex, and therefore, could not eat.  I was devastated.  I hand-expressed my colostrum and gave it to him with my finger for the first two days.

We called a lactation consultant and met with her on Friday (two days after his birth).  God orchestrated our meeting.  She encouraged me to keep giving him my colostrum and that “your milk will come in soon.”  We had to ensure John was hydrated, and continued counting poops and pees — which were consistent with where they should be at that point.  She also gave us a curved-tip syringe to more effectively feed him the colostrum and she provided finger-feeding syringes to encourage the realization that sucking comes with a reward — the milk.  She also told us that my nipples were flat, and a nipple shield would help him suck easier and would bring them out.  She encouraged 8x/day pumping to encourage my milk to come in faster.  She also took a look at John and alerted us to two medical problems that may be hindering his ability to suck: 1) He was tongue-tied (his frenulum went all the way to the tip of his tongue) and 2) His jaw looked uneven and his cranial plates may have been moved incorrectly in the birth canal.  I was overwhelmed.

She informed us that, if my milk did not come in within the day, we would have to give him formula (she suggested Alimentium, the pre-digested kind), to prevent dehydration.  I called my cousin and his wife, who have a 6 month old and were still breastfeeding.  Though they lived on the other side of the state, Sam was traveling with their son to see his parents that night!  They were very happy to give John some milk while we waited.  (Just like the wet nurses of our past.)  We were so thankful to them for this sacrifice.  However, the next day, Saturday, I still did not have any milk (only the colostrum).  We began giving him formula because we knew he was hungry and needed nourishment.  We chose to give him the Alimentum brand which prevents colic and food allergies.  We had to give him formula, with a bottle, for 3 days: Saturday, Sunday, and Monday.  I was heart-broken.  Not only did I not want to give him formula, I also had heard that once a baby receives a bottle, they are no longer attracted to their mother’s nipple.  But he needed to eat.  I worked with him, using a nipple shield, during this time, and continued to give him my colostrum with a syringe, but he still did not want my breast.

On Tuesday (yes, 6 days after giving birth), my milk came in.  Hallelujah!  This seemed like such a long time to me.  What if we didn’t have formula to give him?  Would he have been okay if we had lived a long time ago and had nothing to offer him?  Why did my milk take so long?  Was it stress?  From that point, I was able to pump (with the pump I had bought prior to the birth: our single pump, the Medela Swing Pump, because I thought I would only need to pump on rare occasions).  I pumped 8-10x/day for a couple of days, but became frustrated at doing this with one breast at a time.  We rented an industrial pump, an Ameda Elite, with help from my mom.  After this, the pumping time split in half and was much more efficient.

Our pediatrician confirmed that he was, in fact, tongue-tied, and he referred us to the ENT department at our local hospital.   We went in, a week after his birth, and the doctors clipped his tongue right then and there; this was considered a minor surgery.  It was devastating to see (and hear) John being clipped, but since, he as been much happier being able to actually move his tongue!

Our lactation consultant referred us to a Doctor of Osteopathy in Manipulative Medicine for his jaw.  This DO specializes in working with infants and feeding problems.  I was so thankful to have gone to her several times over the next weeks and knew that it was working because his suck with the nipple shield improved every time.

I worked with John at every feeding.  I let him have some breast-milk with either a syringe or the bottle, then worked with him to latch with the nipple shield (usually fighting/working for 20 minutes or so) then giving him the rest of the milk (2-3oz).  The nipple shield was awful.  He was learning to suck, but I don’t think he ever swallowed much because all of the milk just fell out the sides.  We were both a milky mess at the end.

Afterward our feeding time, I would have to pump for about 30 minutes to have the next bottle ready for the next feeding which would begin about an hour later.  (I would always have 3 bottles in the refrigerator and began stockpiling up in the freezer, producing over 20 bottles in freezer bags.)  This was beyond devastating for me.  I wanted to snuggle my little one.  I didn’t want to pump while I left my week old, two week old, etc. to sit in his bouncy chair, also frustrated.  But I had to do it.  At the beginning, all I could do was cry.  This is not what I had envisioned.  This is not what I wanted.  But I loved him and I knew that my milk was what he needed.  After the first 2 weeks, I came to terms with this reality more and more and became more accepting of the situation.  He is getting my milk; he is getting the nutrients he needs.

I was worried about losing my milk.  Only pumping, and no breast stimulation from my little one.  So I kept working with him.  I did not want to lose my milk.  I brought that huge pump with me everywhere.  If I was going somewhere for more than 2 hours, it went with me.  I did not want to “miss a feeding.”

I continued to meet with my pediatrician, who was very supportive of my determination to breastfeed.  At my second to last meeting with the DO, she suggested we try breastfeeding without the shield.  I was very hesitant, but she helped me try. John sucked for a few moments!  I was so happy about this because I really hadn’t tried this way at all.  My nipples were no longer flat because of all the pumping, so he was more attracted to them.  For the next week, he latched on a couple times, for a minute or so, without the shield.  It was excrutiatingly painful.  My nipples became a bit deformed from his sucking and both nipples began to blister and crack.  I didn’t care.  I continued pumping and working with him.  The next week, I went to see the lactation consultant again (I had been seeing her at least once a week).  I shared with her the positive news that John was at least slightly attracted to the breast.  She was thrilled and watched me latch him and also showed me the correct way to latch.  He did it!  In her office, he sucked for 20 minutes.  He was feeding on my breast!  Oh, praise you Lord God, praise you.  I would have pumped for 12 months.  But my baby, my precious baby, got it.  He was stronger and he got it.  Oh, I am so proud of all his hard work.

For the next weeks, I got used to the blisters and the cracking and just bit my tongue and tried anything to distract me from the pain.  I pumped on and off to give my sore nipples a chance to heal.  After two weeks, my right nipple felt okay to nurse.  But my left began having needle-like pains during and a long time after the feeding.  (I feed him on every other breast ever 2 hours during waking hours so he’ll have at least 8 meals a day).  I discovered that these sharp, intense pains were due to a yeast infection, “thrush.”  I tried Dr. Jack Newman’s nipple ointment for a week, no relief.  Monistat cream, no relief.  (After using, I always wiped them off with a vinegar-water solution using a cotton ball and olive oil using a cotton ball.)  I finally realized that I needed to use Gentian Violet; this treatment, according to all the gurus, works like a charm, but turns your nipples and your baby’s mouth bright purple.  I had no other choice, my left breast killed and I needed relief.  Now, one week after treatment, I can say that we are yeast-free and happily nursing at both breasts.

I returned my huge pump.  I never want to pump again.  I know I will have to (for Army Reserve weekends), but that is it.  I love my baby at my breast.  It is a bonding time.  It is still not pain-free or always pleasant, but it is a wonderful time.  For the bonding alone, I love it, but it is also more convenient and cost-effective and, most importantly, nutritious!  I have made sure to eat lots of meat, egg yolks, cheese, butter, and veggies as well as supplement with coconut oil, Vitamin D, and fish oil.  Oh, praise God from whom all blessing flow.  Praise Him, praise Him.  I have never prayed for anything more in my whole life and He has given me the desire of my heart.  He is a good and gracious and loving and holy God. 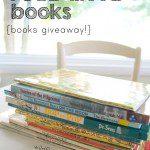 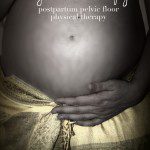 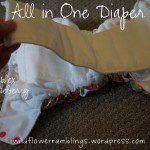 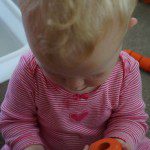 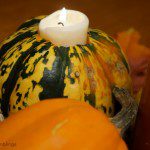